This is probally gonna stir up all the trad climbers but I really think that Elsies Peak could do with a couple of easier sport climbs. There are already 5 sport routes there so it is not an exclusive trad crag. I believe that its got some serious potential for development into a great sport crag.
The views over False Bay are awesome.
Wadda think?

You're gonna get some flak for that one, let the abuse begin. My opinion is that there are only three (including the Ledge) trad crags around Cape Town, leave them be.
Top

I'm with you Stu.
Leave the trad crags be.
Top

Yes I expect some flak.
Elsies Peak has bolted sport routes so it is not a (exclusive) trad crag.
There are tons of trad routes on the ledge and Muizenburg ect.
Maybe its time that the trad climbers go and find some more crags?
I live within walkind distance of Elsies and don't see that many people on the crag.
Maybe a better way of approaching this is are there any (easier) lines that cannot be tradded? Perhaps these could be bolted. If there are any classic trad routes these would be respected and not bolted. I just think that a couple of easier routes (17 to 22) and checking and fixing any dodgy bolts on Andy's routes would be really cool!

Thanks Justin, thats a good point.
Even if some trad routes are bolted the climber still has the choice of not clipping the bolts.
By the way on his first attempt he had the wrong size cam and had to clip a bolt. Second attempt he made it.
Top

I'm afraid that Elsies is very much a TRAD crag, with a few unexplained, all tradded, sporty routes. Let the sport climbers find a new crag !! The trad guys have already found this one. Why on earth must every trad crag that isn't heaving with people every day be written off and transformed into a sport crag. I lived within walking distance of Elsies for 20 years so have some connection with the place. Don't bolt where it isn't wanted. Three trad areas is nowhere near sufficient and too many trad areas have been stolen by the sport set already.
Top

Just climb past them he says...as a trad climber do you know how much it grates my carrot to find bolts where bolts are not wanted!!! I'd rather climb something or somewhere else.
Save up, buy some gear and start tradding if you wanna climb there so badly... why change a place to suit yourself, comm on, buck up little camper... get some nuts...
Top

Bolts at Elsies will have a 10 year max safe crag life, but will be dodgy in 5. Natural pro lasts for ever... leave it natural. Especial so close to the sea. 4 bolted lines at Morgan Bay are soon to be chopped... they are verging on unsafe. All bolted since April 2000. Nature takes its course..even on the finest stainless. Sure they can be rebolted...but by who? When? How much? Who is rebolting The Hole, The Mine...?
Top

Dominoes are the problem. Blot a few lines at Elsies and sooner or later people will enjoy those routes and bolt others and so on...

If you have time and energy to bolt routes thats fantastic, but I feel it would be better directed at developing new (preferably non-tradable) areas. That way everyones happy!
One life, one body. Use them well.
Top

I have only recently started climbing outdoors, and the whole trad argument doesnt seem to make a whole lot of sense to me, maybe it will after I have been climbing longer? The way I see it is there are so many sport routes to choose from that I dont see the point of wanting to convert trad to sport? If you are tired of climbing sport routes and you want to take on new routes and challenges then you have to decide do I want to take the leap (not intended) and start trad climbing. I like the idea that their are trad routes out there which are far lesser climbed than sport routes it makes the routes special (rather than well travelled) so maybe one day when I have sport climbed for long enough to be secure in my abilities I will take the plunge (also not intended - I think) and start trad climbing. It makes sense, to make everything sport just denies yourself a different experience and the possibility of progression.
Top

It was retrobolted, with it's neighbour, a number of years ago. Apparently was too hard for the new generation.
Top

Clinton to the rescue...

As a matter of interest, how many people have been on the route since it got bolted??
Not sure what the condition of the bolts are!?
justin@CapeTownClimbing.com
Top

I did it a couple of months ago using the bolts. They held plenty of falls but look a little dodgy so who knows. Jeremy Samsom was fighting gravity that day and fell all over the place too. If they can keep his middle aged frame from hitting the ground then they should be solid enough for the rest of us

Cool, thanks for the info.
Top

Don't think I would trust those bolts at all anymore!!
justin@CapeTownClimbing.com
Top

This is really cool!!
Congrats Gosia!
One day when I'm small and strong...

I hope there was someone with a camera nearby?
Top

Never climbed there, but since I've started trading in the Magalies and some other place I've come to value the different feel that the trad areas have. The trad area's really lose their magic if there are bolts or thousands of old pitons on the routes right next to placements. If the route is really that run-out(not hard) then place one bolt and use natural protection for the rest.

when the time comes would it not be a good candidate for a removable bolt, as it is only one placement?

perhaps i am beating a broken drum, but i really do think those devices are perfect for these sorts of situations
Sandbagging is a dirty game
Top 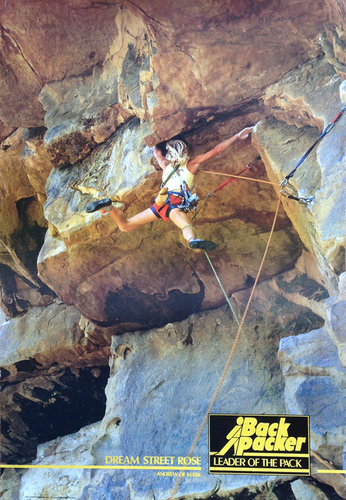 Q's:
- Who took the photo? (the photographer is not mentioned on the poster).
- What does Andy's T-shirt say?
justin@CapeTownClimbing.com
Top

Bonus; what does the route name reference? No googling.
Top

My guesses below, but I assume that Jeremy is correct.

You may still be here tomorrow, but your dreams may not. Cat Stevens
Top

The photo was taken by Dion Tromp
justin@CapeTownClimbing.com
Top

Thanks for the messages

@ Warren - there's no need for a removable bolt, because you can place gear at the crux (either a very large cam or a very small one).
Top

If Andy went to SACS... why is his hair so long?

BTW, well done Gosia on the send, this route has been on my list of climbs to do since I started climbing.
Top
Post Reply
44 posts